To vote LNP, please number all the boxes as shown. 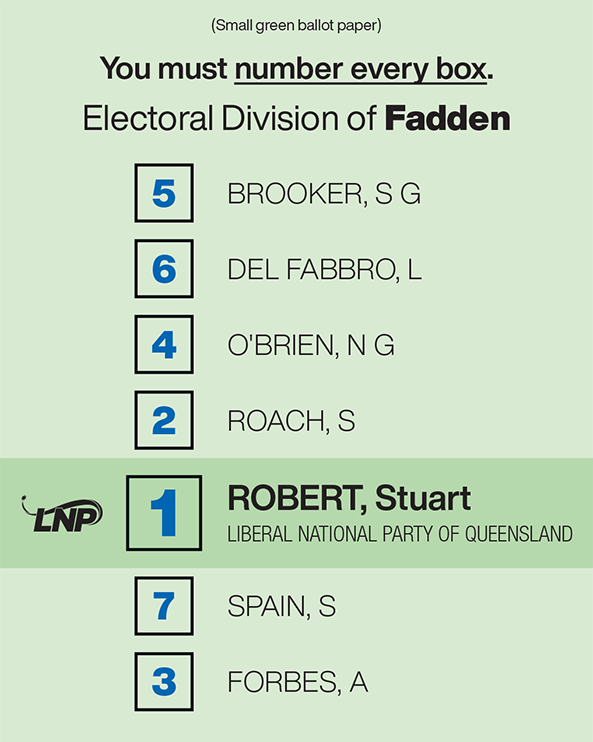 How to Vote for the LNP in the Senate:

Stuart Robert is the Member for Fadden and Minister for Employment, Workforce, Skills, Small and Family Business.

Stuart Robert grew up in Bundaberg, Queensland on his family’s cane farm and attended Kepnock High School and The Rockhampton Grammar School prior to winning a scholarship to attend the Australian Defence Force Academy and subsequently the Royal Military College, Duntroon.

Stuart Robert served in the Army for 12 years in Infantry and Intelligence Corps units including deploying operationally to Bougainville in 1998 as part of the Peace Monitoring Force. Whilst serving in the Army, Stuart Robert completed a Bachelor of Arts (Hons) and Masters degrees in both Business Administration and Information Technology.

In 2000 he left the Army and, together with a colleague, founded an IT services firm that rapidly expanded to become a nationwide business that was twice included in the Business Review Weekly Fast 100 list, which recognises the fastest growing companies in Australia.

Stuart Robert was also a founding director of Watoto Australia and a member of the Watoto International board. Based in Uganda, Watoto operates one of the world’s largest non-institutional orphan care programs in a country where there are two million orphaned children due to HIV-AIDS and war.

In 2007 Stuart Robert was elected Federal Member for the electorate of Fadden. He is a passionate advocate for the northern Gold Coast in Canberra, working hard to influence the decisions made that affect his local community.

Stuart Robert is married and has three sons. In rare moments of spare time he enjoys spending time with family, 4WD with his boys, learning Chinese and reading military history. He is a keen supporter of a number of community organisations and is looking forward to the Gold Coast Titans and the Gold Coast Suns bringing home the flags.

Is Anthony Albanese in hiding from his costings? The ultimate runaway from a presser… https://t.co/m1UMn5l0nb

RT @LNPQLD: BREAKING: Anthony Albanese has just stormed out of a press conference, refusing to answer questions on his policy c… https://t.co/1iZ8kkodWw

Great to join Maria Kovacic in Parramatta today, she is a strong local champion for this area. It is a clear choi… https://t.co/ito2m3PurV