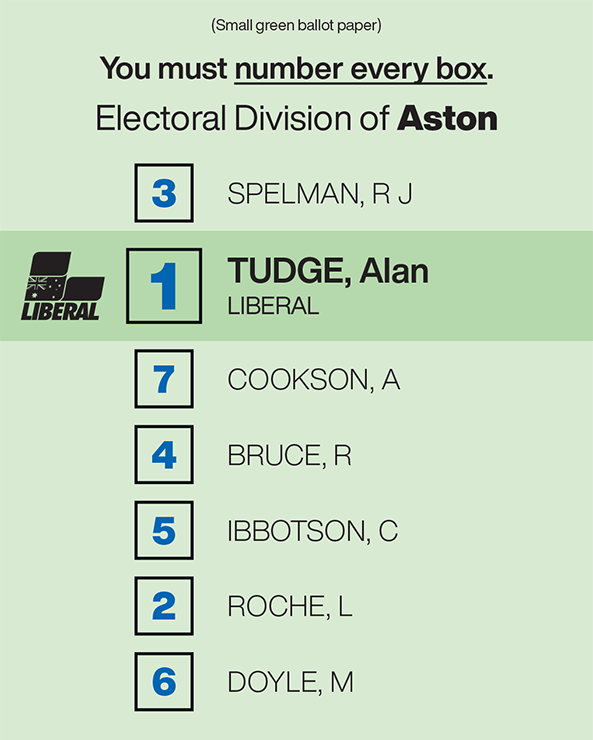 How to Vote for the Liberals and Nationals in the Senate:

Alan Tudge was elected to the Federal Parliament in the seat of Aston in Melbourne’s outer east in 2010 and re-elected in 2013 and 2016. From August 2018 to December 2020, he was the Minister for Cities, Urban Infrastructure and Population. In December 2020 he was appointed the Minister for Education and Youth.

He was appointed Parliamentary Secretary to the Prime Minister following the 2013 election under the Abbott government and entered the full ministry in early 2016 as the Minister for Human Services. In that role he was responsible for introducing the “cashless welfare card”, recouping billions of dollars in welfare over-payments, and assisted with getting welfare expenditure growth back to a sustainable rate. He also oversaw important reforms to the online gambling sector.

In December 2017, he was appointed Minister for Citizenship and Multicultural Affairs. In this role, he led the case for improved English language capabilities of newly arrived migrants, adoption of Australian values, and greater distribution of migration patterns. He also introduced the Global Talent Scheme visa to better attract global talent.

Prior to entering parliament, Alan spent most of his career in business, including several years with the Boston Consulting Group in Australia, Malaysia and New York, and running his own advisory business. He was also Senior Adviser to former Education Minister Brendan Nelson and Foreign Minister Alexander Downer. He also spent several years as the Deputy Director of Noel Pearson's Cape York Institute where he oversaw the development of a large welfare reform agenda which included the introduction of conditional welfare payments and a sharper focus on home ownership and improved education.

He has been involved with multiple community organisations, including being one of the co-founders of “Teach for Australia”, a national non-profit which targets top graduates from non-teacher faculties and fast-tracks them into teaching in disadvantaged schools.

Alan and his family are actively involved in their local community of Knox, including as Patron for the Knox Cancer Council Relay for Life, local church, and honorary Rotarian. He is a proud supporter and sponsor of numerous local sporting clubs and other non-profits. (As well as a proud North Melbourne supporter!)

He was born and educated in the eastern outskirts of Melbourne where his parents were new immigrants to Australia. His first jobs included apple and potato picking, factory labouring, and bar work.

He holds a Bachelor of Laws (Hons) and Bachelor of Arts from Melbourne University (where he was Student President) and an MBA from Harvard University.